The Gallery in Marquand 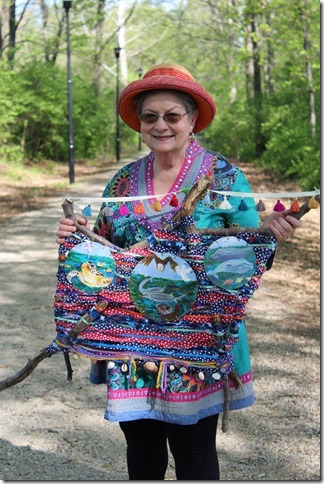 With a title such as this, one immediately understands the Artist’s spiritual connection with life and her surroundings. “With Eve being the Alpha and Omega of all women, I wanted to create a representative exhibit that mirrored the mere existence of womanhood. The trials and triumphs, the subtle and the bold, the evolutionary and complacent roles we play in society,” said Dickerson.

Obtaining her BA in Art Education from Northwestern Louisiana State University, followed by her MA in Art Education from Southeast Missouri State, Dianne taught in the Sikeston, MO Public School System from 1968 – 1981. Holding a lifetime teaching certificate from the Missouri Department of Education, Ms. Dickerson also maintains a Commercial Drivers License from the Missouri Department of Transportation… a perfect illustration of the diversity that resides in the very soul of this artist.

Although life for Dianne has always been about Art and its creation, in 1982 a new, unexplored dynamic impacted not only her ability to function in society, but the perspective and focus of her work as an artist. “You see, in 1982, mental illness encroached upon my world, eventually consuming my very being, and leading to a stay in a psychiatric hospital in Kansas City for evaluation and treatment,” stated Dickerson. The stay not only proved to be therapeutic, but instrumental in molding and shaping her present-day mission in life. “I want not only this exhibit, but entire life’s work, to help breakdown and eventually erase the stereotypes and stigma associated with mental illness. In society, there exists a terrible misconception that those dealing with, or living with, a mental diagnosis, are lesser individuals, when that couldn’t be further from the truth. It’s much more complex than that. Look at me; I’m a prime example of how a highly educated woman who is, has and does contribute to society, became helplessly plagued with a mental illness that rendered me non-productive without treatment,” says Dickerson.

After the onset of her illness, Dianne gained inspiration for her artwork through a variety of gainful employment opportunities, including driving a school bus. “I eventually returned to my love of teaching which included a wide spectrum of educational instruction. I went from being an Art Teacher for K-12, to the Special Education classroom, then on to become an Inner City Pre-School Educator before instructing on the college level at Penn Valley and Mineral Area Colleges in their Continuing Education Department. I tackled every challenge that came my way and looked at each as an excellence in education building block; never as an obstacle. I taught my GED classes with the same conviction as my English as a Second Language students. It was all in my wheelhouse, and each experience made me a little more diverse and committed to tearing down those walls that had been thrown up to make society shy away from interaction with those who have now, or in their past, lived with a mental illness. It is my purpose in life, and I’m doing it through my God-given talent of Art,” stated Dianne. No stranger to exhibiting her work, Ms. Dickerson has been featured in the following venues: